Wadi Musa is a town located in the Ma'an Governorate in southern Jordan. It is the administrative center of the Petra Department and the nearest town to the archaeological site of Petra.

As the main tourist gateway to Petra, WADI MUSA is an anomaly, a modern southern Jordanian town given an unfamiliar twist with lots of signs in English.

All main roads to Petra meet just above Wadi Musa, a spring in the hills at the top (eastern) end of Wadi Musa which is marked by a small triple-domed building sheltering a rock – traditionally, the rock struck in anger by Moses – from beneath which water emerges. From here, the whole of the town is strung out for 4km along a main road which heads downhill all the way, offering spectacular views out over the mountains and eventually terminating at the ticket gate into Petra. 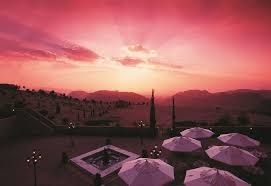 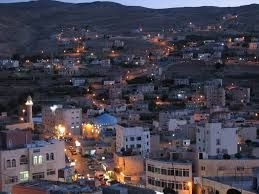 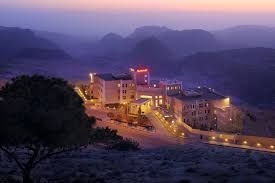 Wadi Musa, the town where the Petra National Monument is located is named after Moses, the famous Biblical Figure who had made a stop here in Wadi Musa and is believed to struck a rock and hence forth, spring water started gushing and hence, the spring well in Wadi Musa, located along the highway going to Petra is now named Ain Musa (Moses Well). Most Tour Buses have a whistle stop here at Ain Musa which is located at the right side of the highway (along a white multi mini domed structure) and you can take pictures and videos of the spring well and they claim that you can even drink the water here as it is very clean and the spring water even taste sweet!

Inside the rectangular room is the large rock from which the water gushed forth thousands of years ago. Today bricks have been built around it, and around most of the spring, allowing easier access to the water. Walking across the brick floor, you can watch the water flow through the center of the room and out the building. In the middle of the room is an eight foot wide well where you can dip into the spring and drink the water.

The Nabateans built channels that carried water from this spring to the city of Petra. Wadi Musa was also nicknamed the "Guardian of Petra". 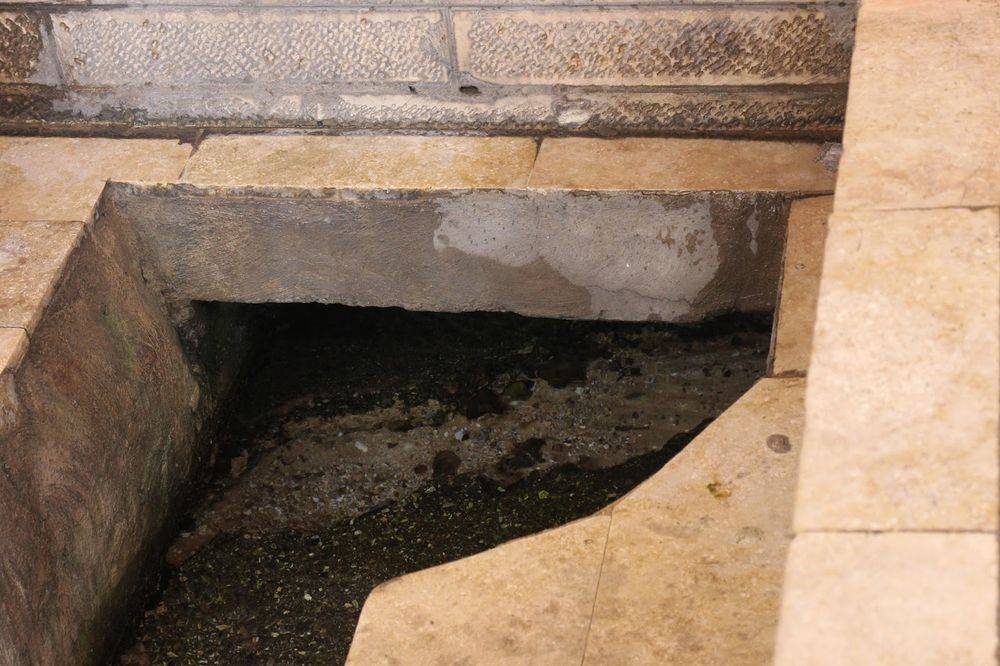 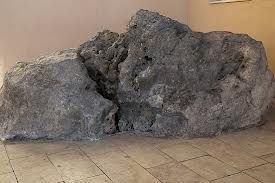 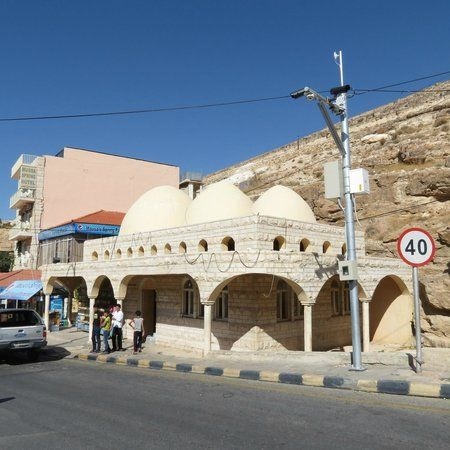 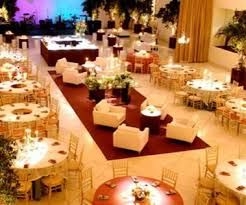 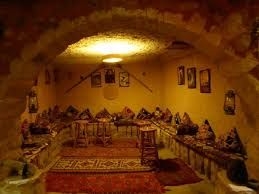 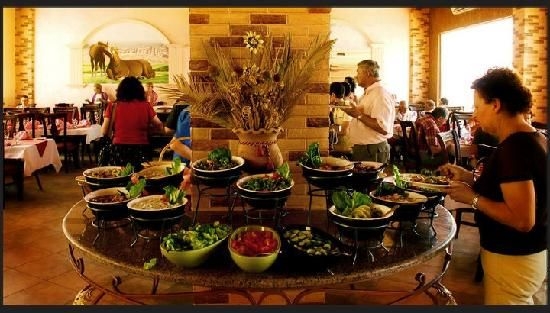 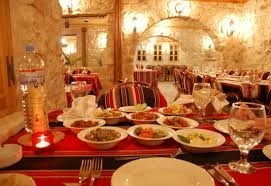 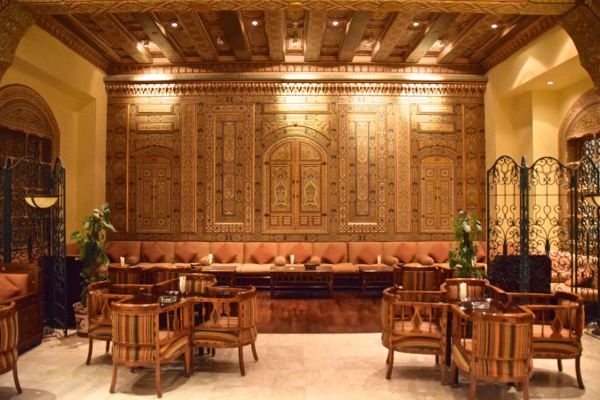 Shisha is smoked in many places in Wadi Musa town, many places you can relax, enjoying a meal, or coffee,tea enjoying a traditional Shisha pipe. Shisha is a flavored tobacco smoked through a large hookah, otherwise known as a water pipe. While it’s origins are decidedly Eastern, this relaxing activity has spread and you can find shisha cafes around the world.

Wadi Mousa is the name of the village closest to Petra, and is the destination of buses going there. It is the official address of hotels and so forth.

These houses were grouped around a spring, which has gone underground in modern times. This was also a settlement which goes back at least to Nabatean and Roman times.

Recently in 1995, when the Alanbat Two Hotel was being built in the very centre of the present day Wadi Mousa, the destruction of the old houses uncovered a great arch. The Ministry of Antiquities was duly informed and excavations showed the remains of an impressive palace, probably that of a Nabatean noble. There was a decorated colonnade, a number of frescoes and what were described as the finest mosaics of the period to have been found in Jordan. The arch itself was believed to be part of the cistern that served the Roman bath system which was also found on the site - oddly enough almost exactly above the present day Salome Turkish Bath. It was a pity that the arch was recently demolished. The palace was beautifully sited, to get the finest view of the Petra mountains, the same view that inhabitants of Wadi Mousa covet and try to give themselves today.

There are several families (tribes) in Wadi Mousa. The largest is probably the Hassanat (more than five thousand of them); they are very closely followed by the Nawafleh who also have two or three secondary schools where all the pupils are from the family ! The Nawafleh are the largest and the most active branch of the Alaya who are the oldest family in the valley. Also descended from the Alaya are the Masa'adeh and the Amarat. Across the valley to the south, you have the Fallahat, the Farajat, the Salameen and the Maashallah. Nearer to the town are the Hillalat. The Hamadeen are higher up the hill and the Twaissat are small families mostly near the town. The last one is the Shamasin, a very small clan right up above the Nawafleh. As you see, each tribe has its territory, although things are getting a bit mixed up nowadays as people sell land out of the family. One still talks about the area of the valley by the family name : "Jebel Masa'adeh", "Jebel Hamadeen, "up to Nawafleh" "down to Fallahat".

Most of these tribes are known for family characteristics - the Nawafleh tend to be the management types, the Masa'adeh are rather fond of collecting money and land (same thing!), the Amarat are more peaceful and homeloving…. They also have distinctive family facial characteristics, I enjoy trying to identify people's tribe from their visual appearance.

Their dancing, men and women, is marvelous, quite different and much more exciting than that of most of the tribes of Wadi Mousa.

There used to be a "folk lore band" in Wadi Mousa in which about 20 men, almost entirely from the Hassanat tribe, presented the Bedouin dance which I call "Wakhid wa nuss" (or "one and a half", the name being taken from the usual beat). This is a wonderfully exciting dance, where the men circle (usually) the fire, their hands on their neighbours' shoulders, and advancing in rhythmic jumps interspersed by a hard stamp on the ground. It doesn't sound very interesting described like this, but with the fire, the music from the drum or the shababa, the Arab costumes and head-dresses, and usually at least one sword being waved by the dance leader, believe me - it is! This is basically the dance that the men do at most village weddings, but compared to the Hassanat on a good day (night!) it is just prancing! In any case the men usually enjoy performing it.

The women's dancing is basically a fully dressed version of the "belly dance", often done with a scarf or wide girdle tied tightly round their hips so that the "belly" stands out, so to speak. Most women have their own particular variation, but they will only dance in front of other women or in front of their brothers or husbands. Even a woman tourist would have to be quite lucky to see this.

The Hassanat also have style! at one time somebody threatened to find and beat up one of them when his family wasn't around, so all the Hassanat men got together and marched through the village street. Since the tribe numbers around 5000 members, even if one eliminates old and young and those not free that particular day, it must have been an impressive sight, but the Hassanat went one better.

The Hassanat "immigrated" to Wadi Mousa some 50 or 60 years ago, some even later than that. They were originally from "El Hai" a smaller valley, higher up the mountain, west of the road to Shobuk. El Hai is now a deserted village, in a beautiful site - but rather cold except in high summer. Most of the Hassanat families in Wadi Mousa still own land there. There is a good spring which is closed off most of the time, you have to sort of unscrew it, and this water chills one's teeth, including in high summer!

The Hassanat, like the Hillalat and the Maashallah, are generically part of the "Bani Sakher" tribe, one of the great Bedouin tribes in Jordan. They are only a couple of generations removed from Bedouin themselves, and the men are nearly all experts on desert living and camping out.

The Alaya, with their sub tribes, claim to be the original inhabitants of Wadi Mousa. The others, all of whom are closer to Bedouin than they are, do not dispute this. Several people, and not always the oldest, claim to have been born in a Bedouin tent (ask Mahmoud Asri Hamadeen, the usual driver of the bus going to Wadi Rum!) Among these families many outright Bedouin customs persisted until very recent times. But whatever their claims, they must all nowadays be considered as fellahin ("farmers" or "countrymen"). I have called these people "villagers" to distinguish them clearly from today's Bedouin. The French translation would be "paysans" or "peasants" but in English this word has derogatory connotations which do not apply here.

Nearly every family in Wadi Mousa has at least some land, they grow fava beans (broad beans in English) to make the favourite breakfast food of "fool", onions, potatoes, olives, various fruit.

The word used for "gardens" or "terraces" in Arabic is the same one as "trees" and I took a while to realise what exactly people were doing when they talked about "watering their trees".

The fruit grown in Wadi Mousa is prized all over south Jordan and taxi drivers bringing fares to Petra will stock up before going home. In the summer, the apricots, peaches, nectarines and greengages are wonderful.

Most households owning fig trees preserve the fruit in the sun. The figs are split open and then laid out on trays covered with a fine netting. The result is something quite different from the dried figs one finds in the shops in Europe - and indeed in Jordan. These sun-dried figs are better than any sweets I have yet to eat, and in fact, few of them last very long, unless the housewife is very severe!

Tomatoes are dried like this as well. They are cut into slices, according to the household custom, sprinkled with salt and placed on the roofs like the figs. These usually do last a fair while, although nowadays tomatoes are available in the winter, and there is no real need to preserve them. They taste rather nice, though.

The olives come later, usually in November. Nearly every family owns a few olive trees, and gathering in the olives is hard work. When picked, the black olives are spread out on a cloth in the sun to be checked and ripened before being taken to the olive press at Shobuk to be pressed for oil. Families are proud to be able to produce their "own olive oil" when guests are present. The green olives are treated differently : they are slit, or sometimes crushed slightly before being preserved in water with a little salt and sometimes slices of lemon. No other spices or vinegar are used. They would keep for several years like this, but are usually eaten by the time the next harvest comes along. In "olive season".

Most families also own various animals, donkeys, goats and sheep, horses, and of course, poultry. The horses are usually used for working in Petra. 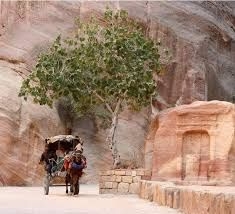 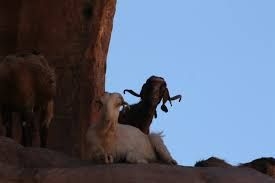 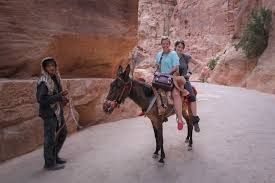