Off the beaten track 30km northwest of Irbid, tucked into the angle of borders formed by Jordan, Israel and the Golan, the windswept village of UMM QAIS is well worth the effort of a long journey, whether you visit on a day-trip from Irbid or stay overnight to relish the still twilight and fresh, chilly mornings. The main attraction is exploring the remote, widespread ruins of the Decapolis city of Gadara, on the edge of modern Umm Qais, some of which are jumbled together with the striking houses of black basalt and white limestone of an abandoned Ottoman village. It’s a popular choice for Friday outings, when the parking area can be filled with family cars and youth-club buses, and the ruins swamped by teenagers more interested in having a raucous good time than absorbing the atmosphere. Umm Qais is unmissable, but do pick your moment to visit.

Since the foundation of the State of Israel in 1948, Palestinians who were expelled from or fled their homes have come here specifically to savour the spectacular views over their former homeland – the waterfront city of Tabariyyeh (Arabic name for Tiberias), the choppy lake itself, and the villages and lush countryside of the Galilee. The tradition is continued today by many Palestinian Jordanians.

After the death of Alexander the Great in 323 BC, Gadara was founded by the Ptolemies as a frontier station on their border with the Seleucids to the north (gader is a Semitic word meaning “boundary”). In 218 BC, the Seleucids took the city, but came under siege a century later from the Jewish Hasmoneans; when the Roman general Pompey imposed order throughout Syria in 63 BC, he personally oversaw the rebuilding of Gadara as a favour to one of his favourite freedmen, a Gadarene.

The city won a degree of autonomy under the Romans, and became a prominent city of the Decapolis. Roman rule – particularly following Trajan’s annexation of the Nabatean kingdom in 106 AD – brought stability and prosperity. As at Jerash, Gadara saw large-scale public building works during a second-century golden age, including construction of the great baths at Himmeh. Literary sources describe Gadara at this time as a city of great cultural vitality, a centre for philosophy, poetry and the performing arts, where pleasure-seeking Romans came from all over the empire. As early as the third century BC, a native of the city, Menippos, had risen to become renowned in Greece as a Cynic philosopher and satirist. By the second century AD, the city’s Cynic streak was flourishing in the hands of Oenomaos, a nihilist and critic, although perhaps the city’s best-known sons are Philodemus, a mid-first-century BC Epicurean philosopher, andMeleager, a highly regarded love poet. Theodoros of Gadara was a famous rhetorician of the first century BC, who taught the Emperor Tiberius. Later, two Gadarenes of the third century AD stand out: Apsines taught rhetoric in Athens; and the scientist Philo refined Archimedes’ calculations of mathematical pi.

By 325 AD Gadara was the seat of a bishopric, but its proximity to the decisive battles at Pella and Yarmouk, when Muslim armies defeated the Christian Byzantines, led to the establishment of Muslim rule over the city decades before the foundation of the Umayyad caliphate in Damascus in 661. However, a series of earthquakes not long afterwards destroyed much of Gadara’s infrastructure, and the town went into rapid decline. At some point in the Middle Ages, its name changed to Umm Qais, possibly derived from the Arabic makes (frontier station) or maqass (junction), but little is known of the town from this time.

In 1806, the German traveller Ulrich Seetzen identified the ruins as those of Gadara. During the 1890s, a small village grew up on the Roman ruins, the inhabitants reusing the pre-cut stones to build their homes around graceful courtyards. A modern village soon developed nearby, but people continued to occupy the Ottoman cottages right through until 1986, when the 1500 inhabitants accepted payment from the Ministry of Tourism to leave their homes, in order to enable archaeologists to clear the site for excavation.

However, since then not a single square of village land has been cleared. In the mid-1990s the ministry changed its tune, backing instead a project to convert the Ottoman cottages into a tourist village and chalet-style hotel. A handful of houses were renovated – among them the buildings now housing the Rest house and the museum – but work then stalled. Other schemes have come and gone, but for much of the year the abandoned Ottoman village and its once-grand Roman neighbor stand quiet, tour groups sweeping in and out, weeds growing higher and dust-devils infiltrating the long narrow streets.

At the western edge of the modern village of Umm Qais, as you approach the ancient site you’ll pass two Roman tombs in a hollow to your left; the basalt doorways are beautiful, and it’s tempting to link them to the miracle story, but that appears to be supposition.

From the ticket office, up some steps above the car park, a Roman street leads you into the abandoned Ottoman village, where you can wander freely in and out of the weed-ridden courtyards and dusty alleys. The street leads to the evocative West Theatre, built entirely of basalt; its three thousand spectators – including VIPs in freestanding high-backed power chairs – had a fine view west over the city (now a grassy hill dotted with olive trees).

North of the West Theatre is Gadara’s most dramatic space, the Basilica Terrace, cut into the bedrock on one side and supported by vaulted shops below on the other. Its main feature, closest to the theatre, is a square Byzantine church dating from the fifth or sixth century. A small narthex opens into an outer circular passageway, still paved with coloured geometric tiles, which encloses a central octagon demarcated by basalt columns which probably supported a dome. Within the octagon, a small depression and apse housed the altar, behind which stands a thin, pink marble column carved with a cross. On the north side of the terrace, the white limestone paving and columns of the atrium stand in stark contrast to the black columns of the church.

The atrium gives onto Gadara’s main, paved street, the Decumanus Maximus, the clear line of which can be traced east and west – but the main draw is the simply spectacular view, a breathtaking, wind-exposed 180-degree sweep taking in the Jordan Valley, the Sea of Galilee (with the city of Tiberias in plain view), the Yarmouk Gorge and, most impressive of all, the Golan Heights rearing up in front, pointing the way north towards snowcapped Jabal ash-Sheikh on the Lebanese border. Linger here.

The North Theatre and museum

Above and to the east of the Decumanus Maximus rise the restored arches of the Rest house. Following the street around the edge of the hill brings you to the grassy bowl of the North Theatre, its stones plundered to build the Ottoman cottages. At the highest point of the hill is the site museum, occupying the former residence of the Ottoman governor, an elegant building on two storeys, with a portico and a lovely, peaceful internal courtyard. Highlights of the collection include a headless marble statue of Tyche found in the West Theatre, mosaics and carved sarcophagi.

What we’ve described here comprises only a small part of Roman Gadara: the city originally extended for a kilometer westwards from the Basilica Terrace. It remains largely unexcavated beneath the fields.

About 100m west of the Basilica Terrace is a ruined podium monument of unknown usage. Opposite stands a ruined baths complex. Some 250m further on is a colonnaded section of the street, and away to the left are the remains of more baths and a small forum. After another 100m you’ll spot a circular structure, the foundations of the tower of a gate across the street, within which steps lead down into a locked underground mausoleum. Gadara’s West Gate, with an exposed section of basalt street, is 200m further on. Alongside the modern tarmac road (which formerly ran to Tiberias) are the remains of a hippodrome, culminating, 300m further on, in a partly reconstructed monumental gateway to the city, designed to impress visitors approaching from the Jordan Valley below. Looking back from here gives an idea of the enormous size of Gadara in its heyday, and the impossible task of excavating it all. 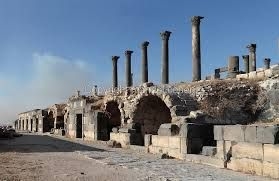 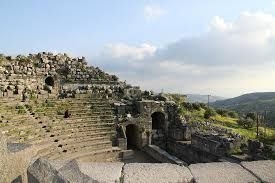 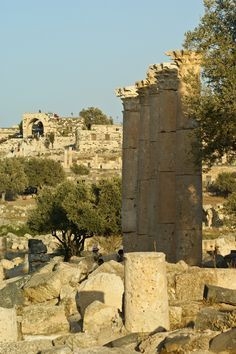 At the roundabout, take the 1st exit onto Route 35heading to Umm Qays

Drive to your destination